The week that was.

Monday
Monday is trash day. Big whoop, right? Well … it has a special significance now. My Guy and I have realized we never see our neighbor Creepy Chuck putting out trash cans. Like, ever. Like, the trash truck never stops at his house.

The husband and I are now obsessed.

Maybe Creepy Chuck just takes his trash and dumps it somewhere. But in my fantasy, he has an entire room of his house that’s just garbage. I wish there was an adult I could report this to. Instead, I’m concerned that I will end up being That Neighbor on the local news who is all, “He was quiet and kept to himself …”

Tuesday
I was going to drop off an old printer at the local thrift store. However, that plan kind of had to wait, as there was an armed robbery at the thrift store.

Evidently, 2 guys came in with guns and demanded cash. And when 1 of the guys tried to shoot his gun? The bullet fell out of the gun and rolled across the floor. Because I guess you use a second-hand firearm to rob a thrift store?

Also? I can’t imagine that a thrift store would be a high-dollar robbery target. But, if you’re still at the point where you try to shoot and the bullet rolls across the floor, maybe it’s good to get some practice in before you go big-time.

Wednesday
I cleaned up 1 too many puddles of pee. Guess who’s back in his industrial strength anti-indoor-urination suit? 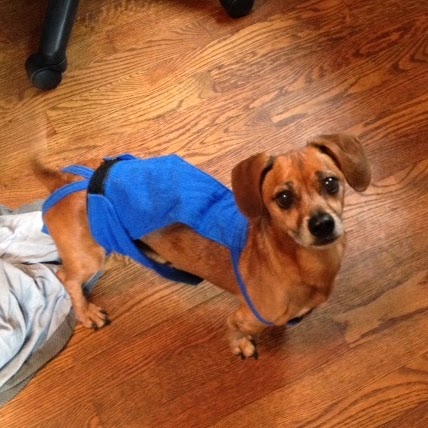 Oh, Foxie. You rock those Overalls of Shame. Also, you kind of look like Super Mario. I want to kill you, but you’re so cute.

Also? I’m sorry I made up that mean song about you wearing The Overalls of Shame and a maxipad and about how you should be really embarrassed and how no ladydog was going to date you now. I was being a bully. But I’m also just really, really over cleaning up your pee. You aren’t incontinent. You’re just an ass.

This year, spring break coincided with the party. This meant a gaggle of 10-year-old boys playing basketball in the street, complete with 2 dads in referee shirts. It did my heart good.

Friday
I’ve mentioned the player piano in the lobby of the building where I work. It’s a beautiful baby grand that evidently has a very limited range when it comes to songs it can play magically by itself.

“Rosanna” by Toto is a good song. It’s not as good when performed on player piano. And it really doesn’t hold up the 20th time you hear it on a player piano in the span of 3 hours.

The hallway from the lobby to the office where I work acts as kind of a sound vacuum. And I sit right by the door. So, when I sit at my desk, I hear the piano, loud and clear. Meet you all the way! Doo doo doo! Rosanna!

I finally cracked under the pressure.

I didn’t want to be suspicious, so I didn’t Google “Honda Accord vs. player piano” at work. But I Googled it at home … because they never check the personal laptop, right? You know what came up? That Honda ad with Michael Bolton. Sadly, there’s no research on Honda Accord/player piano showdowns.

Basically, the takeaway is that Michael Bolton sent me a sign. A sign that I need to push the player piano into parking lot and ram into it with my car. Because what else would he say? He wants to be my soul provider? No! He wants me to run over that fucking piano before it desecrates 1 of his songs!

And that, my friends, is why it’s good that the weekend is here.

I don’t ask much. Really.

Vigilence, with a side of creepy-as-hell.